St George's Hall, in the heart of the city of Bradford opened in 1853, and was the first grand public building in the city. It was conceived as a place where the communities of Bradford could gather to be inspired by the world’s best music and entertainment. Following a 3 year closure for transformational refurbishment work, St George’s Hall has now reopened its doors and continues strive to deliver the same vision... 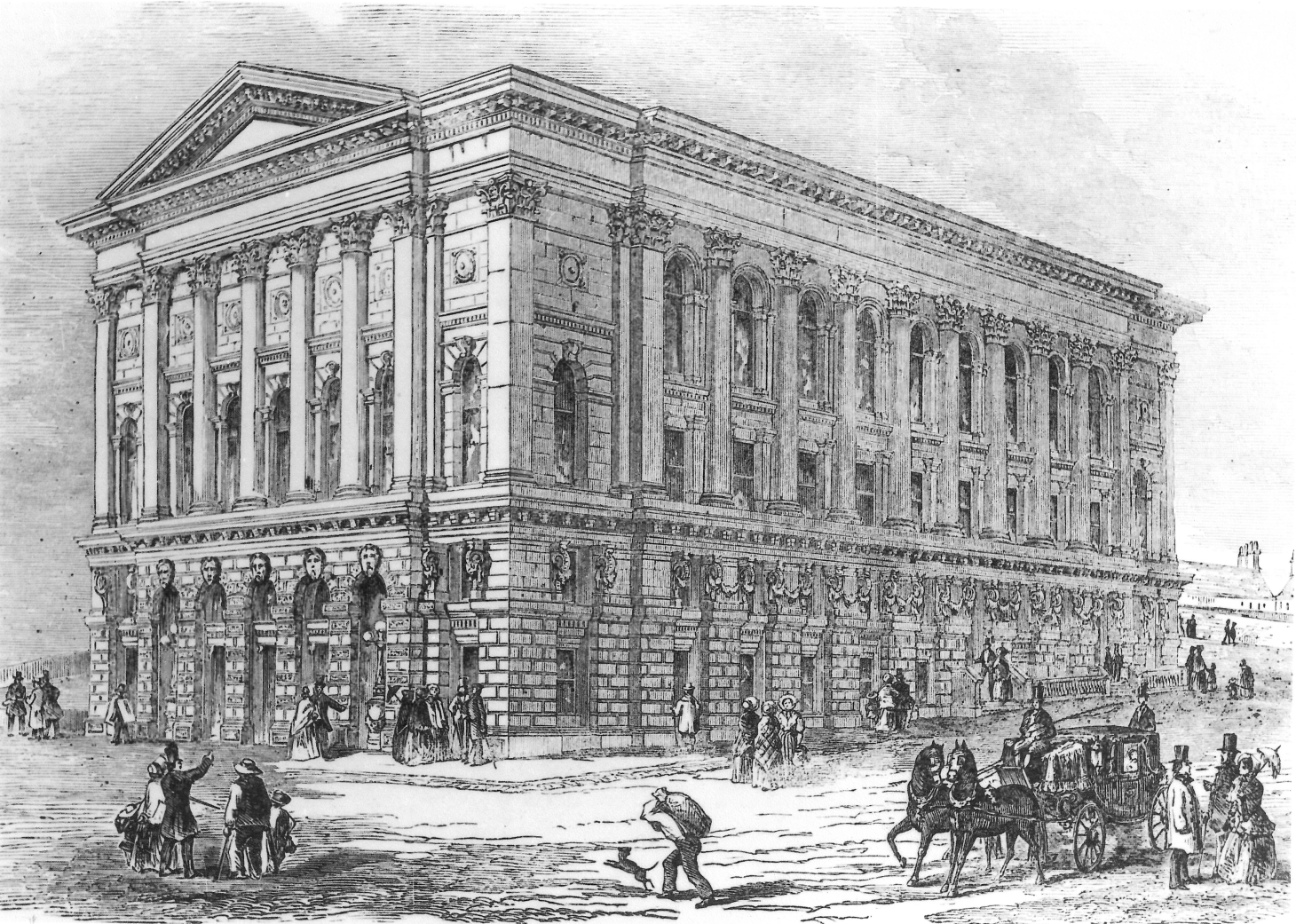 Designed by Lockwood and Mawson in the Italianate style, St George’s Hall was the brainchild of Bradford Mayor, Samuel Smith, who famously described it as “the best means of removing the vice and immorality so prevalent in our population.”  It was his idea to build “a large public hall, in which thoroughly good concerts could be provided at a cheap rate, and would have the effect of drawing away people from beer-houses and other low places.”

Bradford's landmark venue was born out of a proposal in February 1849 during a meeting with subscribers to the Bradford Royal Infirmary fund and Alderman Samuel Smith.  Through issuing public shares, more than £16,000 in capital was generated before the venue's foundation stone was laid on 22 September 1851 - a day declared as a public holiday for Bradfordians! 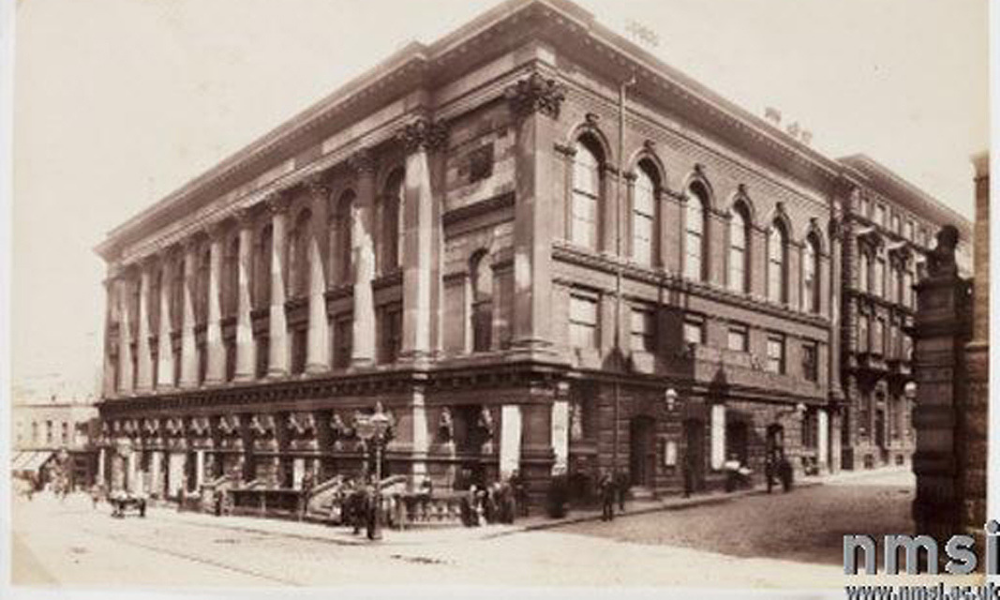 The 3,500 seater venue officially opened on 29 August 1853 with a magnificent three day music festival.  There were performances from the greatest singers of the day including the tenor Sims Reeves and Madame Clara Novello.  A chorus of over 200 voices from across West Yorkshire trained to sing for the occasion; and so Bradford Festival Choral Society was formed and still performs here today. 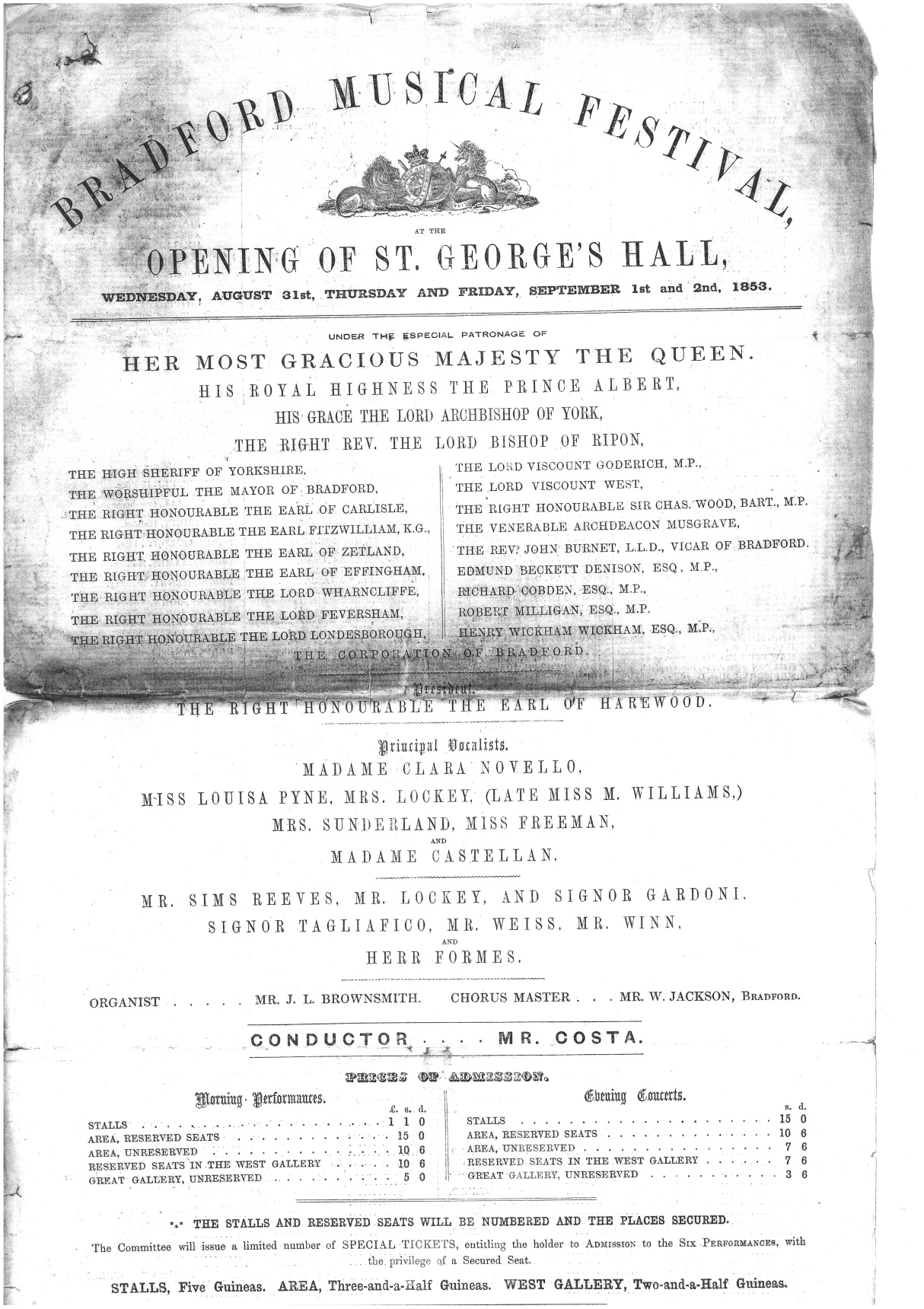 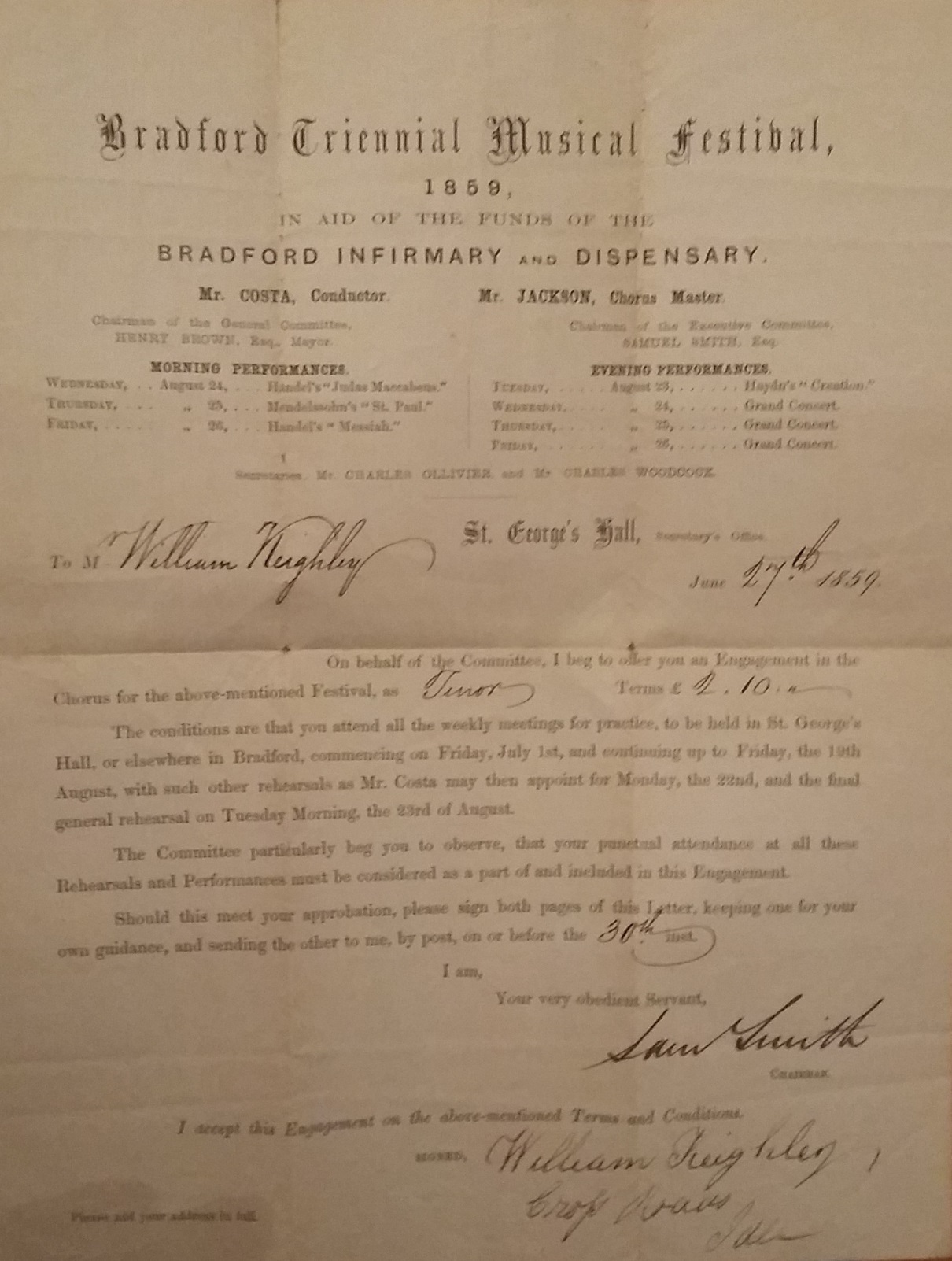 When the venue first opened, the Hallé orchestra was a regular under the baton of Charles Hallé.  Some archived records state that the first “subscription” concert at the venue led by Charles Hallé was in 1867; others show that he had already appeared at St George’s Hall with his “full band” in 1858.  On the day of one particular concert in October 1895, Charles Hallé had died unexpectedly and when the concert was due to commence the rostrum remained empty, but from his place as orchestra leader, Brodsky conducted the Dead March.

Many local people hold St George’s Hall in great affection for presenting live performances of ‘their’ music; providing unforgettable experiences which define their lives and generation.

"St George's Hall in Bradford is one of the UK's greatest concert halls and I always jump at the chance to experience its magnificent acoustic as both performer and audience member.  The calibre of artists and orchestras and the variety of programming at St George's Hall will take your breath away.

St George’s Hall has a long association with politics, providing the platform for prime ministers, protesters and political trailblazers to make speeches which changed the world.  Subjects debated here include the abolition of slavery, Irish independence, worker’s rights, votes for women and the formation of the Independent Labour Party. The 1870 Education Act was presented here by local MP W.E Forster and famously suffragettes interrupted Winston Churchill’s speech in 1910.

"Once in Bradford, I had a particularly tiresome and narkish interjector who kept up a running fire of disparaging interjections; at last he said; ‘If you were my wife I’d give you a dose of poison’. ‘No need for that, my friend’ I replied cheerfully, ‘If I were your wife I’d take it’. The audience yelled with delight and my tormentor left the meeting early”.

The long list of ‘notable speakers and performers’ who have appeared here include the Reverend Dr Livingstone in relation to his discoveries in Central Africa in 1857 and Mr Henry Irving in scenes from various plays in 1878.  Charles Dickens is said to have performed extracts from his novel A Christmas Carol at 127 public readings until the year of his death in 1870. One of them took place at the then newly-built St George’s Hall on Wednesday 28 December 1854. The Yorkshire Observer, which had advertised the event, said there were some 2,500 people present including Robert Milligan MP, industrialist Henry Ripley, sundry aldermen, vicars and “many gentlemen from the Mechanics’ Institutes of neighbouring towns”.

St George’s Hall was a cinema for many years and films were shown here from 1896 to 1948.  In 1896, Sydney Carter saw a film at the hall when his father was the general manager here.  This influenced him greatly and in the early 1900s Sydney started showing films when the hall it was not use for other purposes.

Sydney Carter (1867-1940) was an important figure in film-making history.  He formed New Century Films Company, one of the country’s earliest film distribution companies, based at St George’s Hall, and commissioned Mitchell and Kenyon to film scenes in Bradford.

These remarkable films still exist today and provide a glimpse into the lives of Bradfordians over a hundred years ago. Some restored clips can be seen on screens at St George’s Hall as part of the heritage exhibition today.

The £9.8m transformational refurbishment of St George’s Hall was made possible by funding from Bradford Council and the National Lottery Heritage Fund.  The project has included major works to the roof, windows, electrics and stone work.  The front-of-house areas have been increased, and seating has been upgraded to improve sight lines and comfort, whilst ensuring the world class acoustics in the auditorium remain unaffected.  The magnificent restoration brings the facilities right up to date.

Some facts and figures from the last 3 year’s work:

St George’s Hall has a rich and fascinating past, and unique displays that weave along all four levels of the venue have been created to showcase key events from the official opening in 1853 to the big rock and roll band concerts of the 1970s and 1980s.  There are now over 200 archive items, tickets and signed posters on display inside the venue.

Some fascinating objects were found during the refurbishment which form part of this permanent archive display.  These include the front page of the Daily Express newspaper from 10 January 1928, sweet wrappers and an array of cigarette packets. 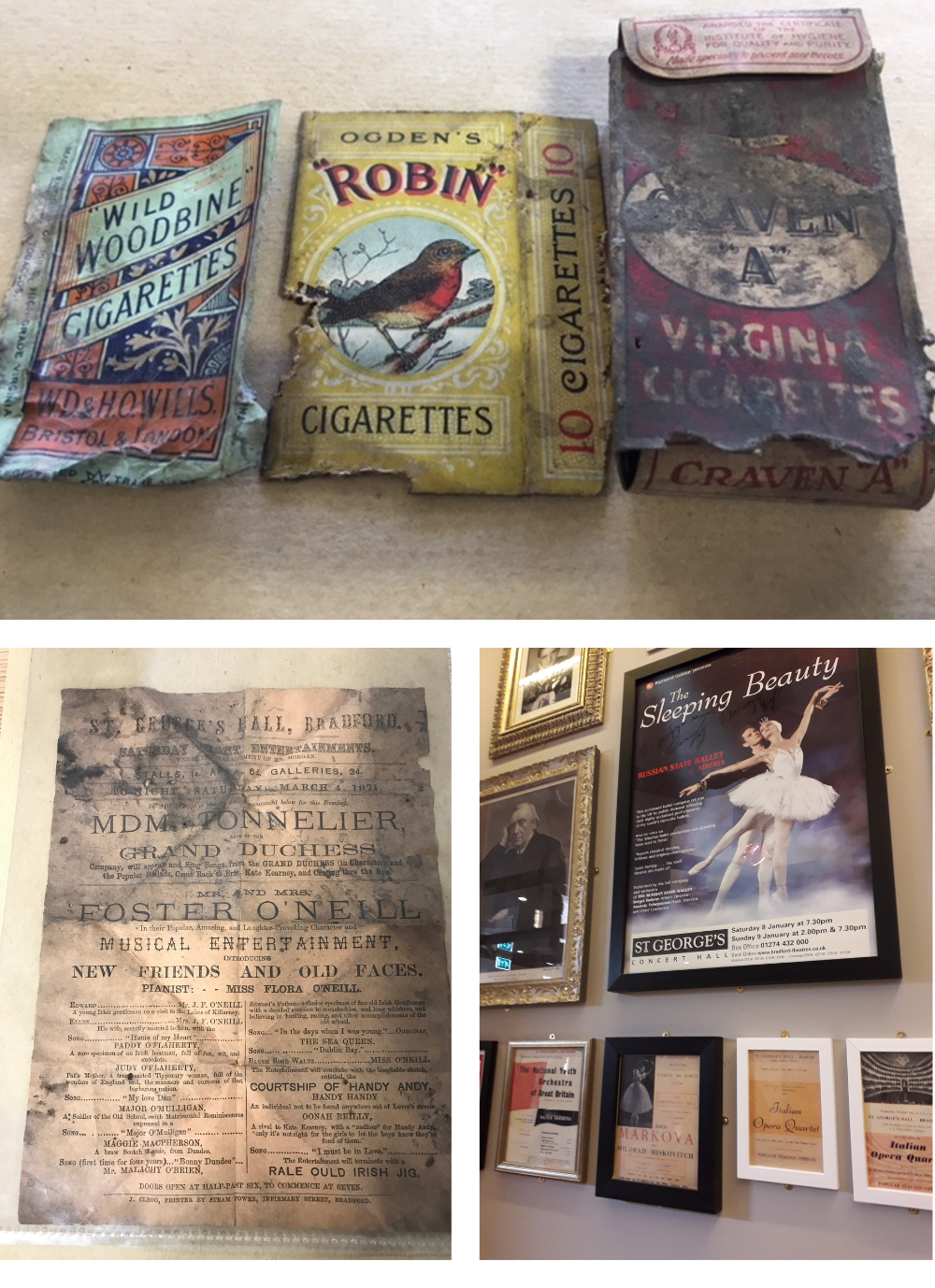 The oldest item found during the refurbishment work was a playbill from 1871, which has been mounted and displayed in the ground floor bar.  The paper had survived as it had been folded to a small triangle and pushed between two planks of the original seating tiers.

The heritage exhibition will make archive materials about the history of St George’s Hall more accessible and develop stronger links with the local community through an outreach and access programme.  We hope you will spend a little time enjoying our much-improved front of house areas, where you can read about the history of the venue, as well as view the impressive re-discovered and renovated mosaic floor in the Café.